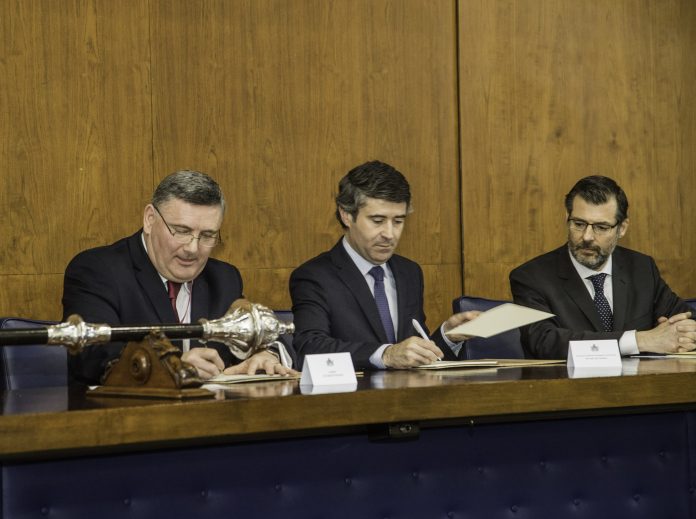 There were historic scenes at the Guildhall today when His Excellency The Secretary of State for Portuguese Communities, Mr José Luís Carneiro, signed a Co-operation Protocol with Wrexham Council.

The signing is the first of its kind in the UK and only the fifth in Europe.

The Protocol recognises the close working relationship between the Council and the local Portuguese groups and its role in contributing to the well-being of Portuguese nationals in Wrexham.

The Protocol will promote a sustainable relationship with the Portuguese community and will also be of help to us meet our public sector duties under Equalities and the Wellbeing of Future Generations Act 2015.

The Protocol does not need any funding from the Council and it will recognise the ongoing commitment of the Consulate General of Portugal in Manchester to the Portuguese community in Wrexham. It will also help us to tackle discrimination, promote equality of opportunity and promote good relations.

“Wrexham is leading the way”

Cllr Mark Pritchard, Leader of Wrexham Council who signed the Protocol on behalf of the Council, said: “I am delighted that Wrexham is leading the way in the UK to formally establish a Protocol of Co-operation between the Portuguese Government and Wrexham County Borough Council which will not only strengthen our excellent working relationship with the local Portuguese community who are living and working in Wrexham but also with the Portuguese Government.

His Excellency The Secretary of State for Portuguese Communities, Mr José Luís Carneiro, said: “In the UK as in Portugal, local councils are essential in embracing and ensuring a successful integration of migrants in the community. This applies at many levels: employment, language and culture, business development and municipal services. In this way, this type of Protocol aims to establish a good context for integration, at all levels, across municipalities where there is a significant Portuguese community, as in Wrexham, with activity which can be appreciated by local authorities.”