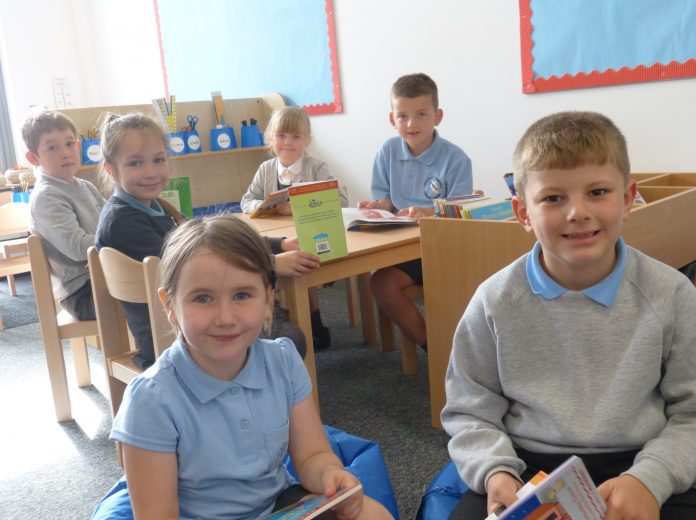 Pupils at one of our primary schools have had an exciting back-to-school week – as they had the chance to take a look at their new and improved school site!

Work to Gwersyllt Community Primary School was completed before the start of the 2019/20 school year, with pupils eager to take a look around the new facilities.

The work – carried out by contractors Read Construction – began late last year, and we had the chance to chronicle some of the landmarks along the way – including the signing of a steel beam used in the new structure, and the burying of a time capsule recording school history.

What’s new at the school?

The new extension has allowed the school to amalgamate its separate infant and junior buildings on a single site.

It also contains a brand new flexible learning zone, designed to meet the needs of the new Curriculum for Wales and the Digital Competence Framework, along with a state-of-the-art wireless audio-visual system allowing teachers and pupils to collaborate on multiple devices and platforms on any screen across the school.

Half of the £3.2m work to the school came from the Welsh Government’s 21st Century Schools fund, with the other half match-funded by Wrexham Council.

Along with the new £1.7m sixth form block at Ysgol Morgan Llwyd, the work at Gwersyllt CP school was one of the last beneficiaries of the Band A round of 21st Century Schools funding.

An official opening for the new site will take place in the new year.

Cllr Phil Wynn, Lead Member for Education at Wrexham Council, said:”I’m very pleased to see the work completed, and would like to thank everyone for their co-operation, hard work and patience throughout construction and renovation – it’s thanks to their work that the improvements to the school have been delivered on time and on budget.

“I’d also like to thank the Welsh Government for their contribution to the project via 21st Century Schools funding – and look forward to further improvements throughout our schools in the coming years.”

Joel Moore, headteacher, said: “The pupils were very excited to see the new facilities at the school, and we’re looking forward to them being able to take advantage of the improved amenities within the new site as soon as possible.

“I’d also like thank contractors Read Construction for their hard work and co-operation, and Wrexham Council for their contributions in organising the project – their work has been carried out to a very high standard and they made sure that the construction phase took place with absolutely minimal disruption to staff and pupils.”

Martyn Davies, Chair of Governors, said: “My fellow governors and I have been kept appraised of this work throughout, and I have to say we’re absolutely delighted not just with the new facilities, but also with how little disruption it caused to day-to-day school life.

“Thanks are due to members of the community for their patience during the work, and the interest they’ve shown in the development – as well as contractors Read, who were always happy to answer any questions.

“Without all the hard work by the headmaster, all of the teachers and staff of Gwersyllt CP, this project would never have run so smoothly, and thanks are due to everyone else involved.

“It has been a great pleasure working with the governing body and all involved over the past twelve months and I hope that we as a governing body can continue to support the school in every way.

Alex Read, Director at contractors Read Construction, said: “We are delighted to hand over the new school facilities ready for the start of the new term. We are confident that the pupils and staff will enjoy their new 21st Century learning environment, which has been delivered through the 21st Century Schools programme.”