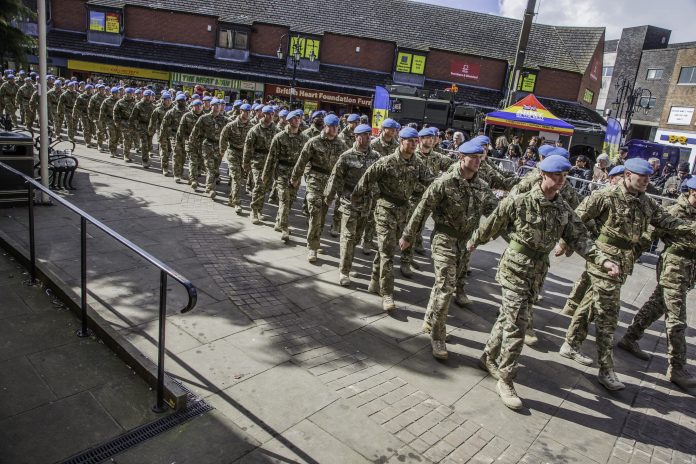 Steve Townley and Janette Williams have recently been appointed as Armed Forces Liaison Officers (AFLOs) to work in Wrexham and across North Wales to promote the Armed Forces Community Covenant – they are going to find out if it is working and, if not, how problems can be solved.

Armed Forces Community Covenants are in place across North Wales.  Their aim is to make sure that when servicemen and women leave our armed forces they are not disadvantaged in any way by their service to their country.  This can happen with problems caused with policies or procedures that may be in place. 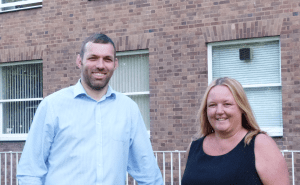 They will look at existing policies and procedures in areas such as Human Resources, Social Care, Education and Housing.  They will also make sure the needs of the armed forces community are fully considered in any new strategic plans and services linked to legislation.

That doesn’t mean they get priority or preferential treatment, just that they are treated as fairly and reasonably as any other resident.

We at news.wrexham.gov.uk spoke to Janette and Steve shortly after they took up their roles to see what they expect from the roles and how we could promote the work they are doing.

“both very keen to get involved”

It’s clear they’re both very passionate about their roles and they both have first hand experience of leaving the forces.  Steve was a former Royal Marine and Janette lived with the RAF community as her father served for 25 years and her husband for 15 years.  They’re both very keen to get involved in “mapping” where the estimated 54,000 ex servicemen and women in North Wales are currently living.

They’ll be taking a look at what works in some areas and where best practice is found it can be shared with other areas.  It’s all about being consistent throughout the region.

Janette, who will be covering the Wrexham, Flintshire and Denbighshire area, explained:

“At the moment we simply don’t know where the majority of this community are living and whether or not they are experiencing or have experienced any problems with things such as housing or accessing medical care.  If you then look at the wider picture and include their families, who are just a very important a part of the armed forces community, you are looking for well over, 100,000 individuals.  We’re keen to contact as many of them as possible to hear of their experiences, good or bad, to see how we can improve things.”

The two are very eager to access available funding to improve the work that’s already going on in the region to assist ex forces personnel and their families such as the self-build project that’s going on in Wrexham.  The project sees ex service personnel learning skills to build affordable housing and also gives them the opportunity to live in the property.  Currently there are vacancies on the project so if you want to see if this is a possibility for you if you are, or you know someone who is due to leave the forces or have already left just email them on:

They are also planning a “workshop” – a drop in type event at the Guildhall on 19 October between 2 and 4 for serving and ex service personnel and their families to attend to tell of their experiences and if they have any concerns or advice others can take advantage of.

“TA’s, Reservists, Cadets, former and current forces and of course, their families”

Steve, who will be serving Ynys Mon, Gwynedd and Conwy, said:

“When we speak of the armed forces community we are including TA’s, Reservists, Cadets, former and current forces and of course, their families.  We would like to see as many as possible on the 19th – the event will be informal and we’re both looking forward to hearing about what goes wrong and what works for those who have made sacrifices whilst they bravely served their country both at home and abroad.”

“fit for the purpose it was meant for”

Both agreed they are looking forward to the enormity of the challenges ahead but also recognise the importance of their roles in making the Armed Forces Community Covenant is fit for the purpose it was meant for – to make sure those who leave or who have left our armed forces are not left with any disadvantage to accessing the services that they are entitled to.

“there is still a lot that can be achieved”

“Since we signed the covenant in 2013 things have improved in Wrexham for ex service personnel and we have several schemes that would not be taking place without the Covenant.  However, there is still a lot that can be achieved and Steve and Janette’s involvement will help us make certain this gets done.  We all owe a debt of gratitude to those men and women who have made the sacrifice to serve their country and I am determined we will not allow them to be disadvantaged as they return to civilian life.”

We wish them good luck in their roles and look forward to catching up with them further down the line to see how well their getting on.

We thought you might like to see some photographs from 5 April 2017 when the Armed Forces Community Covenant was signed and REME received the Freedom of the Borough.