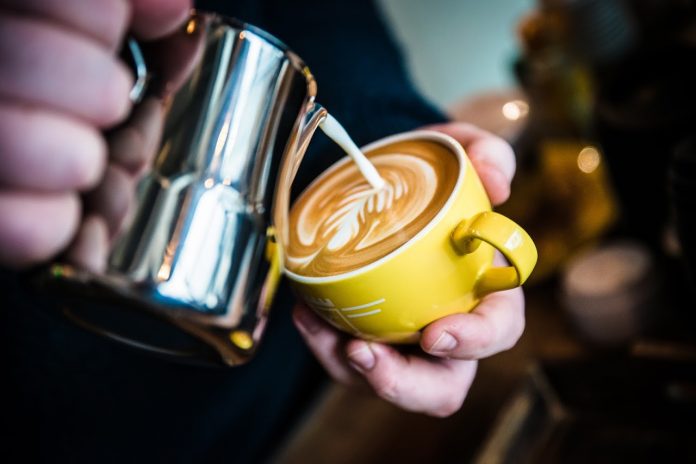 There’s no getting away from it. Coffee shops are becoming more and more popular and with three opening up every day in the UK it’s a common sight to see people going about their day to day business with a take away coffee in their hand.

To see how this trend was having an impact on local trade we popped along to see Andy Gallanders and his brother Phil who runs King Street Coffee and the recently opened Bank Street Coffee between them.

The brothers are both Wrexham born and bred and opening a coffee shop in the town centre simply “seemed like a good idea”.  Andy had been looking at properties for a while and encouraged by his barista brother they opened in April 2016 and have been brewing coffee since.

Phil tells us that their prime bus stop location makes them ideally placed for customers of all ages and 80% of their trade in King Street is take out.

King Street Coffee has been so successful that it received the 2017 Wrexham Tourism Award for best cafe/tea.

We asked if they had had much help from our town centre staff in setting up and they were very complimentary about our Destination Wrexham team in particular who have always offered strong support.

More recently we helped out with finding chairs for their event at Un Deg Un.  An event which saw over 150 people attend the weekly “Voicebox Collective” which featured American Poet and YouTube sensation, Neil Hilborn, who’s video of him reading just one poem has had over 1 million views!  Phil organised the event and of course King Street coffee were present to make sure everyone had a great tasting cup of coffee. 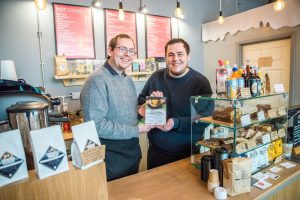 “We’ve both worked very hard and been prepared to go the extra mile such as working out of hours in order to cover events.  We even provided coffee to the media room during the last two elections – we don’t like to say no!  We also try to support the local economy as much as possible and like to be hyper local when sourcing our cakes in particular.  My advice to other independent traders or those considering setting up in Wrexham is to know your business and listen to your customers.

“Wrexham has a very exciting future and in the next 12 months I can see more and more independents opening up.  The new arts and markets facility being one such example where there are plenty of opportunities available.”

We asked Phil how he advertised his business?  His response was an overwhelming vote for social media.

“We use Facebook, Twitter and Instagram and find it has brought us plenty of customers and followers.  It’s free and if we did want to pay for a small ad on Facebook then £50 could get us access to 80,000 people.  Social media also has the added advantage of being able to track how many potential customers are seeing the posts and more importantly whether they like what they see.”

“King Street coffee has become a household name in Wrexham and the brothers are to be congratulated on a job well done.  It’s good to hear we have given them lots of support and I hope this very positive relationship continues well into the future.”

So if you fancy a coffee and a fresh piece of cake look no further than your independent King Street Coffee or Bank Street Coffee.

If you’re thinking seriously about starting a business in Wrexham, contact our business support team on 01978 667300.