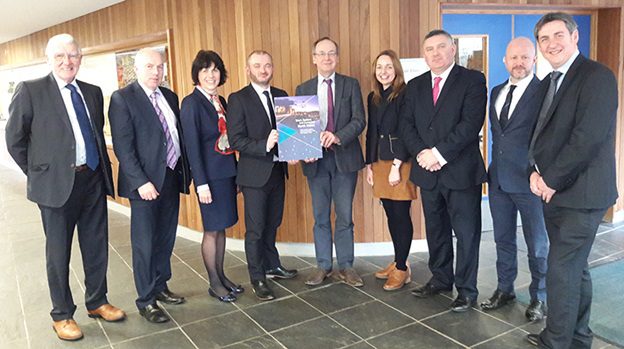 The six North Wales Councils have formally submitted a Growth Bid to the UK and Welsh Governments. Negotiations on the submission will commence in the New Year of 2018.

The Councils have formed a new body, The North Wales Growth Board to finalise the Growth Deal and manage its delivery once agreed with the two Governments. The new body is a Local Authority Joint Committee with representatives of key partners: the North Wales and Mersey Dee Business Council, universities and further education colleges.

The proposals would enable investment of £1.3billion in the North Wales economy from growth deal monies of £328m capital and £55.4m revenue, totalling £383.4m, a return of £3.40 for every pound spent.

Over 5,000 jobs will be created. Other outcomes are being estimated and will include the creation of new businesses, housing units built, including affordable housing and placing workless households into work.

The funds for the Growth Bid, if approved, will be provided jointly by the UK and Welsh Governments.

“We have delivered our outline proposals to Guto Bebb MP, UK Government Minister for Wales and Ken Skates AM, Cabinet Secretary for Economy and Transport in the Welsh Government.

“We have set up a Shadow Joint Committee which will be called the North Wales Growth Board. The new board thanks the members of the North Wales Economic Ambition Board for their contribution to building the platform for a credible and ambitious Growth Bid over the past 18 months.

“We are in the process of appointing a bid development team to work up detailed business cases to the standards required by effective delivery. We mean to do what we say.

“Our proposals have been developed in partnership with the private sector, our universities, (Bangor and Wrexham Glyndwr) and our Further Education Colleges, (Cambria and Grwp Llandrillo Menai). We have had support and encouragement from the UK and Welsh Governments, our Assembly Members and Members of Parliament. It has been a genuine team effort to get to this point.

“North Wales is a united and ambitious region. We aim to develop a new, more prosperous, innovative and productive economy that is smart, connected and resilient and provides opportunities for better employment across the whole region”.

“We will work with the Welsh Government to deliver a North Wales Metro and an improved road network.

“Our proposals will also sit alongside UK and Welsh Government programmes to improve digital and wireless connectivity in the region.

“The Growth Bid taken together with support from governments to improve transport and digital connectivity will drive economic growth, ensure a fair distribution of benefits across the region and help retain young people in the region.

“There is a lot of hard work and tough negotiations ahead of us before we can finalise a growth deal with the two governments.

“The work we have done so far through the Bid Process has given us momentum, unity and a determination to succeed”