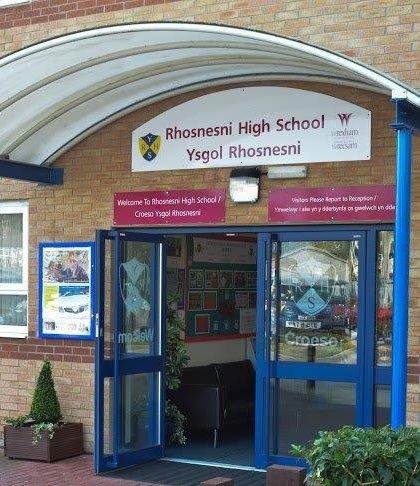 When Inspectors from Estyn, H M Inspectorate for Education and Training in Wales, visited Rhosnesni High School in November, they found the school had made “rapid improvement.”

This was put down to the leadership of the new Headteacher, Mr Andrew Brant, who joined the school in June 2018. Described as leading the school with “verve and enthusiasm,” they said, “The changes he has instigated have greatly improved morale, pupil attitudes and community engagement” and that, “In a short period of time, he has galvanised the staff and driven rapid improvements in behaviour and pupils’ attitude to learning. This has allowed teachers to develop positive working relationships with pupils and to deliver their lessons more effectively.”

“A clear vision and ethos”

Andrew Brant immediately set about establishing “a clear vision and ethos” for the school. Pupils were expected to wear their uniform correctly and new standards for behaviour were introduced. Everyone was expected to keep to the new rules, resulting in raised expectations and aspirations. Leadership roles of staff in the school were redefined and staff worked more collaboratively.

The headteacher, Andrew Brant said, “This is only the start of the school’s journey. I am pleased that Inspectors have validated the changes I’ve made. It’s essential that we continue to raise standards and promote an ambitious vision for Rhosnesni.”

Inspectors reported, “The school has been successful in making recent rapid improvements to many aspects of pupil wellbeing and attitudes to learning, especially pupils’ engagement and behaviour in lessons.” They also mentioned the opportunities pupils had to participate in a range of lunchtime clubs and after school activities and commented on the highly successful peer mentor scheme where older pupils are trained to support pupils of all ages: “This contributes well to the leadership skills of those pupils involved and helps to promote overall pupil wellbeing successfully.”

Pupils have become more involved in decision making. The much praised and admired school Student Council has, for example, shared its opinions about such matters as school rules on the use of mobile phones. Their involvement in decision- making will increase with the recent appointment of two Student Ambassadors to the Governing Body.

Ian Roberts, Head of Education in Wrexham commented “it is very encouraging to read that Estyn have recognised the recent significant changes and improvements made at Ysgol Rhosnesni. The local authority and GwE, the regional school improvement service are confident that the school will go from strength to strength and make rapid progress towards addressing the recommendations of the report whilst embedding the changes already made.”

Cllr Phil Wynn, Lead member for Education stated “It is encouraging to see pupils, staff, governors, the local authority and GwE working together towards the school’s future success and that recent improvement have been recognised by Estyn. I have every confidence that the school will continue on its improvement journey under the collective leadership of the headteacher, governing body and staff at the school.”