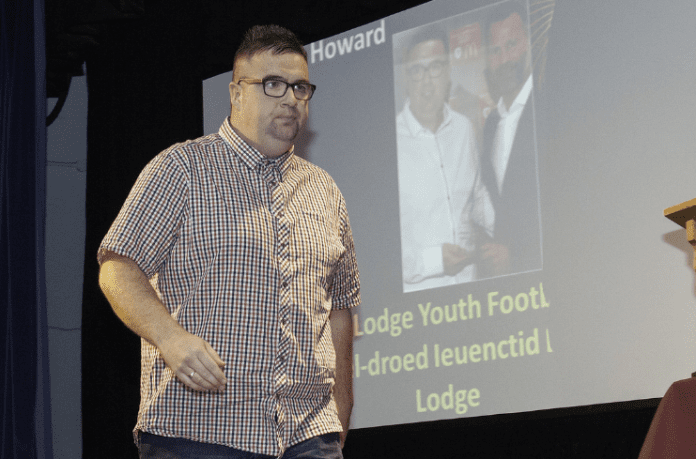 There are just a few days left to nominate your local sporting heroes for the Wrexham County Borough Council Sports Awards 2018, supported by Active Wrexham.

We want to hear from anyone who thinks someone they know is a sporting hero – be that a professional athlete, or a hard-working volunteer supporting their local club through coaching or maintenance.

There’s a whole range of sporting groups and clubs across Wrexham at the community level, covering a wide variety of sports.

And such groups wouldn’t be anywhere without the legions of volunteers supporting them – giving up their time and effort in order to keep grassroots clubs and organisations going, and giving young people and adults alike a place to socialise and exercise.

One of those volunteers is Kieran Howard, who coaches the Under 14s and Under 11s at both Brymbo Football Club and Cefn Druids Football Club.

Kieran took the Adult Volunteer award in the 2016 Sports Awards, and has also been nominated for this year’s awards in the Community Coach category.

He manages more than 50 children at the clubs – and not just on match days, as he’s also in charge of coaching throughout the week.

He also won a McDonald’s People Award 2016 at the Welsh Community Football Awards for his commitment to Brymbo, and is also coach for Cefn Druids FC.

“Award is a pleasure and quite humbling”

Kieran said: “It was a pleasure and quite humbling – to know that a lot of people appreciate what I do. It’s nice to have won something at the local level.

He added: “There’s a lot of unsung heroes out there, who give a lot of time and commitment, and a lot of it is unpaid.

“I do it because I enjoy that sport and enjoy being involved in my community, and giving something back to my community.”

He added: “You’re looking to make that difference in the community, especially with some of the kids I work with.

“You might make someone push that much further, and you can give someone an opportunity.”

He also said that anyone unsure about nominating one of their local sporting heroes should do so, as such recognition was always welcomed by volunteers.

“It’s nice – even the thought of someone going out of their way to make that nomination. It’s nice to get that recognition by that parent, or the player themselves – it’s recognition that you’re doing fine, at the end of the day.”

Cllr Paul Rogers, Lead Member for Youth Services and Anti-Poverty, with responsibility for Leisure, said: “As Kieran himself notes, there are a lot of unsung heroes out there, and it’d be a shame for us to miss any of them.

“If you think someone is worthy of a Sports Award, put them forward.”