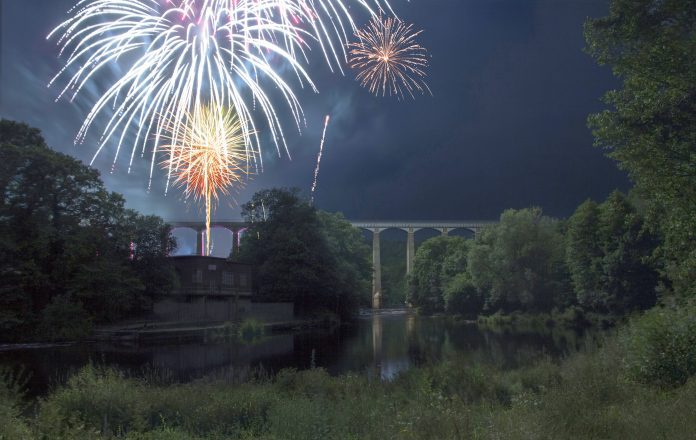 A photo of the spectacular firework finale to the Underneath the Arches event at the Ponty Aqueduct has been voted the July winner in the Wonders of Wrexham 2018 Calendar.

“keep on sending in those photographs”

“I knew when I took the photograph that it was a great shot. Underneath the Arches is a spectacular event with a brilliant firework finale. I encourage everyone to keep on sending in those photographs particularly as we are now into the summer holidays and everyone will be out and about more.”

The event is an annual celebration of the World Heritage Site and sees local residents of all ages enjoying an evening of music and song which ends with the lighting up of the arches of the Aqueduct and the awesome firework display.

The Wonders of Wrexham 2018 Calendar competition was launched at the beginning of November following the news that North Wales is ranked fourth int he world of regions to visit. Staff at the time thought it only right that Wrexham celebrated its place in the world with a snap shot record of Wrexham throughout the year.

The aim of the competition is to find the photograph taken by an a amateur photographer which captures the essence of the month of entry.

Entries are now invited for August and with the summer holidays up on we’re sure you’ll be out and about a lot more so don’t forget to send us your snaps to calendar@wrexham.gov.uk

Entries can be of anywhere in the County Borough but must be taken in the month of August.