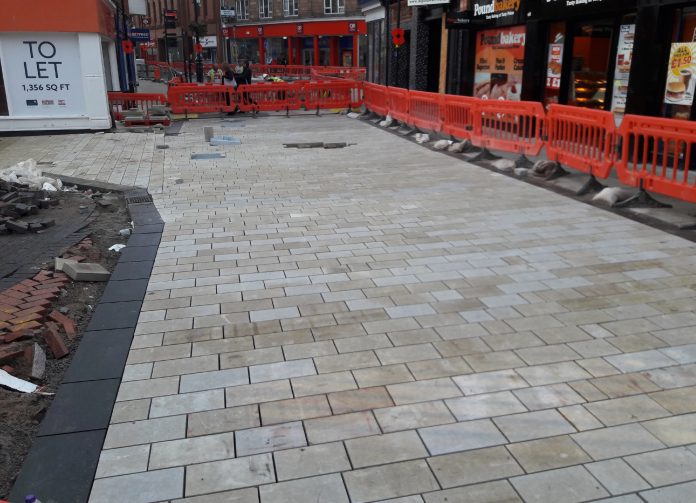 You probably know about the Streetscene works going on in Wrexham town centre.

They’re just the first part of a number of works we’ve got planned for the town centre, with £420,000 in investment planned to improve paving and street furniture in the heart of the town.

A lot of the first stage of works – which covers Queen Street, Hope Street and the High Street – has been finished.

We’re just a few weeks away from completing the first stage in its entirety – here’s an update of what’s been put in place so far.

The footway areas running alongside the shops are nearly finished, with contractors now hard at work on the central carriageways – the paved “road” running through the street.

Landscaped areas on Hope Street at the junction with Queen Street have been re-paved, and once the carriageway is finished, we’ll then move on to installing new railings, seating, litter bins and planters.

Cllr David A Bithell, Lead Member for Environment and Transport, said: “We’re very grateful to the public, shopkeepers and businesses for their patience during this first stage of work in Wrexham Town Centre.

“The updated streetscape is already looking brighter, and the further addition of street furniture will help to brighten the overall appearance of that part of town.”