If you’ve lived or spent a lot of time in Wrexham, you’ve probably heard a few myths and tales along the way…

We wanted to investigate some of these ‘legends’ to see if there is any factual information behind them.

So, with this in mind, we headed over to the archives search room at Wrexham Museum to see what we could find (it’s brilliant place to visit by the way – find out more on our website)…

The first thing we looked into was whether there is any truth to the so-called ‘underground tunnels’ beneath Wrexham town centre.

There’s evidence to suggest that such tunnels exist in some way, particularly around the Butchers market area of High Street. The size of the tunnels and how they link together (if at all) draws the biggest mystery.

As folklore tells us, these tunnels begin somewhere underneath Wrexham Parish Church and run under the town centre. Quite why they were built has been heavily debated…there seems little reason as to why they would exist in this fashion and inconveniently there’s little written evidence to suggest they do.

We checked out half a dozen local history books with little success. Perhaps this is one to come back to another time? 🙂

However, in our research we stumbled upon an interesting tale about a cave that is said to begin at the entrance to Chirk Castle. Well, we say cave…the source describes it as a cave, a mine and a catacomb within three sentences. So take your pick! Anyway, here’s the tale…

The cave was used by Roman miners and runs all the way through to the south of Oswestry. It also has a very sinister reputation.

If you were to be within five paces of its entrance, it’s said you would find yourself drawn inside it and you would become lost in the catacombs forever.

An example of this is a fiddler by the name of Iolo ap Huw, who tried to dispel the myth one Halloween by walking the length of the tombs whilst playing the fiddle…he was never seen alive again!

Another tale is of a fox who being chased by a pack of baying hounds entered the cave to try and escape his predators.

The fox entered the cave, but quickly shot back out, clearly spooked and ran straight into the pack of hounds…but rather than tearing the fox apart, the hounds let it be, as it smelt so strongly of brimstone.

However, it’s up to you whether you choose to believe these tales 😉

If you’ve ever passed along the A525, Ruthin Road into Wrexham, you may have noticed a large gothic-style cottage.

The cottage in Coedpoeth is a former smithy where the blacksmith would shoe horses whilst their riders visited the pub next door.

Well, for over 30 years a doll named Elizabeth sat, perched in the cottage window. The cottage owner bought Elizabeth for her daughter in 1958 and the doll became a big tourist attraction for a number of years.

Some people would have you believe she was Coedpoeth’s answer to Chucky the doll, but more rational people felt her open arms was her way of saying “Welcome to Wales.”

Elizabeth soon developed a following and along with her Teddy Bear, she started receiving postcards and letters from families who had seen her while driving by. Today, she would have a Twitter feed.

Elizabeth was donated to Wrexham Museum in 2009. She has since featured in a display and appeared online.

These are just a few of the many tales around Wrexham…if any of these have caught your interest and you would like to find out more, head over to Wrexham Museum. 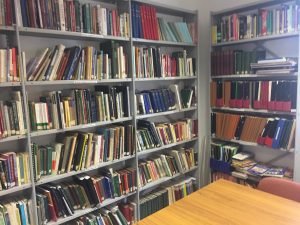 We had a great time rummaging through a very small portion of the local history books available. Jonathon Gammond, Interpretation and Access Officer at Wrexham Museum gives an insight into what else is available:

“There are many more books and articles about the area’s history. Silin’s weekly column in the Wrexham Leader, written in the 1980s and 1990s, highlights often forgotten stories and events, picked up in the archives or chance conversations with locals.

“From there you can go even further back using old newspapers. If you are serious, then the articles in the Denbighshire Historical Society Transactions are a treasure trove of accurate stories about Wrexham’s past. All these sources are accessible for free in the search room on Mondays, Wednesdays, Thursdays and Fridays each week.”

So there you have it! The friendly staff in the search room are more than happy to assist you…as a starter use Curious Clywd – Books 1 & 2.