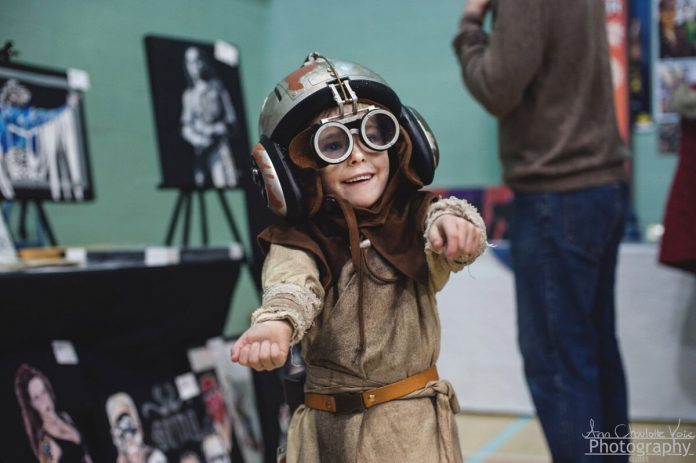 Thousands will descend on Wrexham in December to get a glimpse of their favourite character actor, wrestler, super hero or comic creator when Wales Comic Con takes place at Glyndwr University on Mold Road.

The event which is now in its 9th year has grown over that time to the highly successful spectacular it is now – so successful in fact that since 2015, and to huge public demand, organisers have put two events on per year – one in the spring and one in the winter.

If you’ve never been to Wales Comic Con, or any Comic Con, you may be wondering what it’s all about? It’s a pop culture event where fans of film, TV, media, show characters, get together to see their favourite characters from shows old and new. You can get autographs, have photos taken and attend Q&A panels.

“Cosplay is always entertaining in its own right”

You can also take part in “cosplay” where you can turn up up as your favourite film/screen/comic character and enter the competition for the best dressed.  This is one of the highlights for Wales Comic Con goers and the quality of entries is always entertaining in its own right and good fun for everyone at the event!

There’s a load of other attractions to keep you entertained throughout the day including seeing some fantastic cars and props from TV and film a must for younger fans.  Organisers also make sure there’s plenty to eat and drink as there’s loads of food outlets and of course movie and TV, film and comic hero memorabilia stalls.

Lots of the headliners will be taking part in the Question and Answer sessions which are free to enter throughout the weekend.

You can check out everyone who’s going to be there at www.walescomicon.com – we promise you won’t be disappointed and we guarantee you’ll recognise someone you would love to see.

The first event in 2008 saw 153 people through the doors and used just the Sports Hall.  Today the event is spread over the whole campus including the Nick Whitehead and William Aston Halls, Catrin Finch Centre and the student guild and organisers also bring in a marquee!  Last year over 20,000 flocked through the doors and organisers are hoping for record numbers this December.

Such visitor numbers bring along with them big economic benefits to Wrexham.  It’s calculated that last year’s events brought in visitor spending of £1 million to the local economy – yes one million pounds over four days!  As guests, their aides, visitors, who travel from across Wales and the region to attend all need somewhere to stay which means the hospitality sector also sees the benefit from this bi-annual event. Local and national traders have also realised the potential of this market and put on offers to anyone wearing a Wales Comicon wristband. Its success also puts Wrexham on the map as the place to be as twice a year many thousands head to Wrexham for the Wales Comic Con.

Take a look at the Wales Comic Con official trailer from last year – it’s certainly not what you’d expect to see in Wrexham of a weekend!

Tickets for December’s event are now available online at http://walescomiccon.com/tickets/

Adult tickets are £15 per day and Under 14’s are just £5 per day.  You can also buy VIP tickets which give priority access to Q&A sessions, exclusive VIP goodie bag, priority queueing, VIP Lanyard and, depending on price, photo opportunity vouchers with one or two of the guests.

Details of next year’s 10 year anniversary show in the spring are also now becoming available with interest already causing our twitter feed to go into overdrive with every new announcement.

We’d like to thank Wales Comic Con for their time and interest in giving us some insight into their fantastic event and for helping to put Wrexham on the map as a place to be.