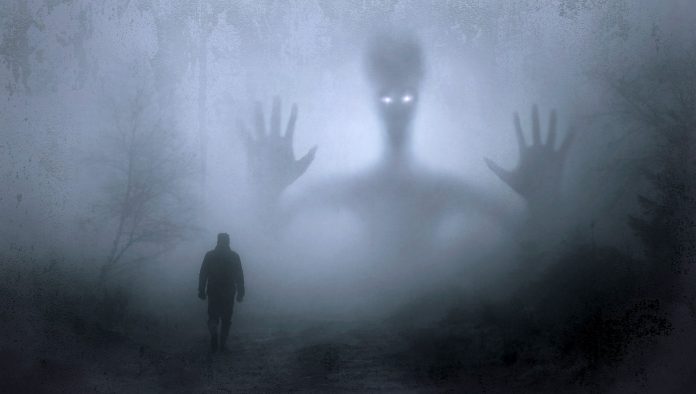 We’re going to cover some of these creepy myths that exist. You may have heard some of them before – and some may be new to your ears…

Either way, grab on to your hat…and prepare for the ride…

Here’s a couple of tales from Haunted Clwyd by Richard Holland. It’s a great book with many more local stories inside.

As you may or may not know, the village of Marford near Wrexham is famous for its “gingerbread” style of houses. They’re very charming houses and they’re full of character.

And many of them have crucifixes built into their design…

But why they were built in this style is for a much more sinister reason. These 19th century houses were actually built like this to warn off a ghost!

This is a tale of vengeance from beyond the grave…

In 1713, Madam Margaret Blackbourne of Rofft Hall was brutally murdered by her womanising husband, George Blackbourne. The murder went unpunished as the coroner (who was conveniently a relative of George) gave a verdict of misadventure…a mishap basically.

George married a new, younger wife six months later – but they’d have no peace together…

Margaret’s corpse is said to have clawed her way out of her coffin and walked through the village of Marford. She stopped at each house, tapped on their windows – sending the occupants into hysterics.

She then made her way to her former home, specifically the wedding chamber to confront George and his new bride. Margaret repeated this journey every night…the villages barricaded themselves inside and George and his wife moved to Rossett to escape her.

But she followed them!

Eventually an archdeacon was called in to ‘pray down’ the ghost, but he was only partly successful. Although her corpse was now at rest, her spirit continued to roam – hence the crosses being built into future houses.

The tragic tale of Margaret Blackbourne has become a legend and she’s now better known as ‘Lady Blackbird’.

Ghosts on your High Street?

A premises on High Street in Wrexham has a long standing reputation for hauntings. It was taken over by an insurance brokers in 1986, and soon after, things are said to have gotten a little strange…

Computer discs scattering themselves across a room, unexpected chills and sudden muggy warmth, filing cabinets suddenly opening and closing – you name it! It’s even said that a photocopier started leaking water!

And in the mornings following this, it’s said that water would be found dripping from different appliances and sockets. Engineers were called out – but they couldn’t solve the mystery. One even simply filled in his report card with a single word… “weird”.

The liquid would leave behind a milky residue. This was sent off for analysis, but never identified.

And then it all stopped! Just like that…and the mystery was never solved.

Shortly after this, the Evening Leader ran an article about the strange happenings at the building. Someone who worked there many years before was quoted on their own experiences:

“Several times I felt as if someone unseen was standing behind me. It was quite an extraordinary feeling. Stock-taking at night was always difficult. None of the staff would stay late.”

If you enjoyed these tales, it may be worth heading over to Wrexham Museum archives search room.

These tales were taken from Haunted Clwyd by Richard Holland, which is one of the many books housed in the search room.

“There are many more books and articles about the area’s history. All these are accessible for free in the search room on Mondays, Wednesdays, Thursdays and Fridays each week.

“We would like to reassure potential users that any paranormal activity is associated with other parts of the building and the sites in Bersham – the search room is quite safe… at least during opening hours.”