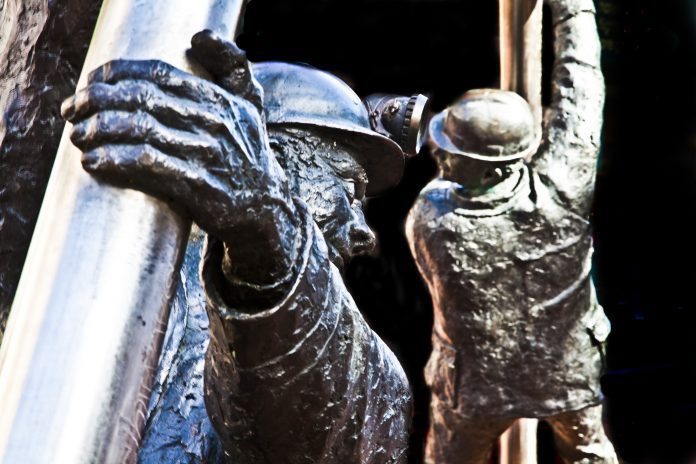 We’re sure you’ve all noticed it, but how many of you have queried it? Your children may have asked you “why are those men on a bendy pole?” or just simply “what’s that?”

We’re talking of course about The Arc sculpture on Lord Street. Here’s a bit of background information about ‘The Arc’.

The Arc was unveiled on February 2, 1996 by Cllr Michael Morris, the Mayor of Wrexham at the time.

It depicts a miner and a steelworker on brick plinths, feet astride 2 steel arcs. They are at full stretch, each trying to bend the arc to meet at the top.

It is sponsored by the Welsh Development Agency, the Iron Steel Trades Confederation, The Arts Council of Wales and Wrexham County Borough Council.

Inscribed on its base is a bilingual poem by Merddyn Ap Dafydd depicting in verse the toil and collectiveness of manual work.

Spotted a pothole? Report it here

But why is it there?

Coal mining is significant in the history of Wrexham as early as the 14th century when the Burgesses of Holt jealously guarded their right to dig for coal in the ‘wastes’ of Brymbo and Coedpoeth.

During the 17th century, demand for coal grew as a greater number of houses had chimneys and then in the 18th century it grew even further as established industries such as Bersham ironworks started to use coal.

In the 19th century, railways heralded coal’s ‘golden age’ as it was used to make the iron rails and power steam locomotives.

Steelworks is also of great importance to our local history and Brymbo was the location of a nationally important steelworks, looked at as ‘the heart of a community’ until its closure in 1990.

A huge impact on people’s lives

The impact on local people after the closures is not something to be glossed over.

The villages running north to south from Brymbo and Llay down to Chirk, Fron and Acrefair were all based around the heavy industries.

With the closures, these self-sufficient communities had to find a new role in the world, with many people choosing to leave the area to find work further afield.

Strong communities were broken up and it took a long time for them to recover.

Important to the people of Wrexham

It was these strong links to our local history that led to the creation of the sculpture in 1996.

Jonathon Gammond, Interpretation and Access Officer at Wrexham Museum says: “Most towns have some example of ‘the great and the good’ standing on a pedestal looking down on passers-by. Wrexham does not.

“Instead the town has chosen to celebrate the lives of two ordinary individuals, both shown at pavement level, where we can look at each other in the eye. They are hard at work, earning a wage and expecting no recognition. That tells you what is important to the people of Wrexham.”

Celebrate who we are

Jonathon continues: “Wouldn’t it be great to celebrate more of the workers past and present, in sculptures around the town. For today, I would pick a hairdresser, a tattooist and a call centre advisor at Moneypenny.”

If you are interested in learning more about the local history, head over to the museum where there is a display in the main gallery focused on Brymbo. Also, in the hippodrome, visitors can watch a new film about Wrexham’s coal mining heritage.

So hopefully now you understand a little bit more about The Arc and if your children ask you about “men on the bendy pole”, you will have a much better answer for them.

Spotted a pothole? Report it easily and quickly online