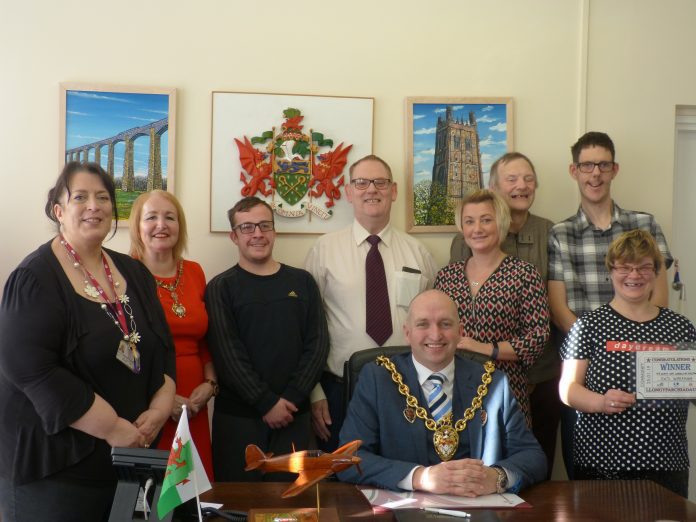 There’s smiles all around for one local group who have won an impressive and prestigious film award – The Iris Prize.

The Standards of Wrexham’s Services (SWS) is a group of individuals who have been diagnosed with a disability and are supported by Wrexham Adult Social Care received the Best Community Short Film for “We Leave Our Labels at the Door” at a recent ceremony in Llandudno.

The Iris Prize was established in 2007 by The Festivals Company, as an international lesbian, gay, bisexual, transgender (LGBT) film prize for any film which is of interest to LGBT audiences. It’s open to filmmakers from around the world and judged by a panel of international artists and filmmakers.

The SWS group received the award for Best Community Short Film. The Awards celebrate the achievements of organisations across Wales, including schools, workplaces and community groups, who over the past year have worked with Iris to make a short film exploring LGBT+ issues.

Nicole Mitchell-Meredith, Person Centred Planning Coordinator who works with the Standards of Wrexham’s Services (SWS) group, said: “We at the SWS are absolutely thrilled to have won this award! They wanted to support people with disabilities to express their sexuality in a safe and informed manner.

“We hope this film goes some way to accomplish this. Everyone has worked very hard and to receive such prestigious recognition is very encouraging for those involved and to the wider LGBT community in Wrexham. I would like to take this opportunity to thank everyone involved and to encourage the SWS and Iris to continue with their excellent work.”

The group recently met the Mayor of Wrexham, Cllr Andy Williams, who congratulated them on their achievement.

You can read more about the Iris Awards here