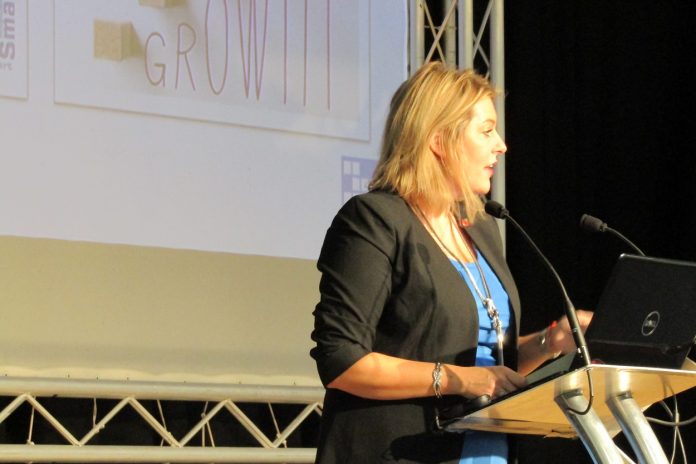 Public and private sector leaders from across North Wales came together with education chiefs and political heavyweights for a landmark conference.

Just days after Chancellor of the Exchequer Philip Hammond announced the UK Government will commit £120 million to the North Wales Growth Bid, more than 200 people were at Venue Cymru in Llandudno for a summit to discuss the next steps towards a vital Growth Deal for the region.

The Smart, Resilient and Connected forum brought together officers and councillors from all six local authorities – including Wrexham Council – as well as executives from further and higher education, and business leaders.

UK Government in Wales Minister Mims Davies (pictured above) and the Welsh Government’s Economy and Transport Secretary, Ken Skates AM, were also in attendance and are committed to supporting a deal that would help take the region from being “good to great”.

“This has got to be the right deal. It must absolutely focus on the projects that will bring transformational change,” said Minister Davies.

“The scale of the UK Government commitment to North Wales should now be clear… go and blaze a trail for others to follow. The endgame is delivery of projects that can really make a difference to the people of this region.”

Mr Skates added: “The Welsh Government has long championed a Growth Deal which is right for the people, communities and businesses of North Wales.

“Working together it must act as the fuel to take this region from being good to great.”

The Growth Bid is made up of 16 projects in these areas: Land and Property Development, Smart Access to Energy, Adventure Tourism, Smart Technology and Innovation Hubs, the Regional Growth Business Fund, Pathways to Skills and Employment, Skills Centres of Excellence, Digital Connectivity, and Strategic Transport.

Colin Everett, Chief Executive of Flintshire County Council and Lead Chief Executive for the North Wales Growth Bid, said the purpose of the conference was to “inform, uplift and prepare” all partners ahead of further discussions in the coming months to secure additional funding and ready the foundations for the hard work that lies ahead.

Those words were echoed by Councillor Aaron Shotton, Leader of Flintshire County Council and Chair of the North Wales Economic Ambition Board, who thanked everyone in attendance for uniting behind the “one north Wales” vision for economic prosperity.

“Remembering why we started on this journey is important,” said Cllr Shotton.

“It began with recognition of two key things which had held us back for far too long; a lack of cohesion across our counties and authorities, and a lack of influence and representation in Cardiff and London.

“In a short space of time we have changed that by coming together with this new, unique and innovative approach, and the Growth Bid is just the beginning. It’s a foundation for us to build upon, but we have only just started to scratch the surface of what we can achieve together.”

He added: “The announcement by the Chancellor in the Budget Statement was positive and can help us move from development to delivery.

“The region is £120 million better off this week than it was last week and that’s because we have come together as one – it wouldn’t have happened otherwise.

“Strength comes from unity and unity is strength, so we will continue moving forward in discussion with the UK and Welsh governments and our partners to bring about the best possible Growth Deal for North Wales.”

Find out more and register your support for the North Wales Growth Bid.