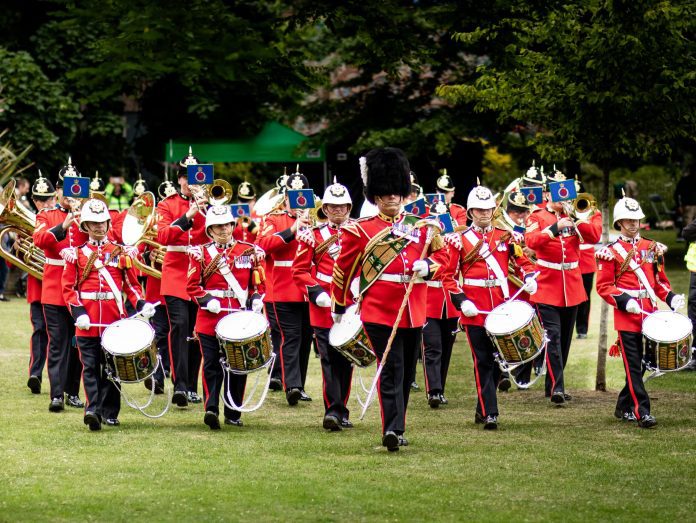 There’s a final opportunity this year to support our armed forces when the Royal Welsh, Comrades and Cadets will exercise their right to the Freedom of Wrexham by marching through the streets with bayonets fixed and Colours flying on September 3, 2022.

For the Reaffirmation of The Freedom of the Borough the parade will form up on Llwyn Isaf Green and after inspection will march through Wrexham on the following route:

The activities start at 10.40 on Llwyn Isaf where the Mayor, Cllr Brian Cameron and Major General Chris Barry will inspect the soldiers. The salute will be taken on Chester Street.

The Mayor Cllr Brian Cameron, said, “Once again we will be privileged to welcome the Royal Welsh for their reaffirmation march and I am looking forward to being part of this event. The Royal Welsh hold a special place in our hearts and I’m sure the streets will be crowded with people wanting to show their support.”

Major General Chris Barry said: “The Royal Welsh are very proud of their close ties with Wrexham which has existed for a very long time. Wrexham is the spiritual home of the Royal Welch Fusiliers and now The Royal Welsh. The 3rd Battalion of the Regiment is raising a company here in the City over the next year and values the support of the Council and the people of Wrexham.

Armed Forces Champion, Cllr Beverley Parry-Jones, said, “Now more than ever we need to appreciate the sacrifice our armed forces make to ensure our freedoms and rights are protected. Sometimes this means making the ultimate sacrifice. I am very much looking forward  to showing my appreciation on 3rd September.”

The Royal Welsh were given the honour of the Freedom of Wrexham in 2008 and last exercised their right to march in 2019.

Take a look at the other events lined up for September: