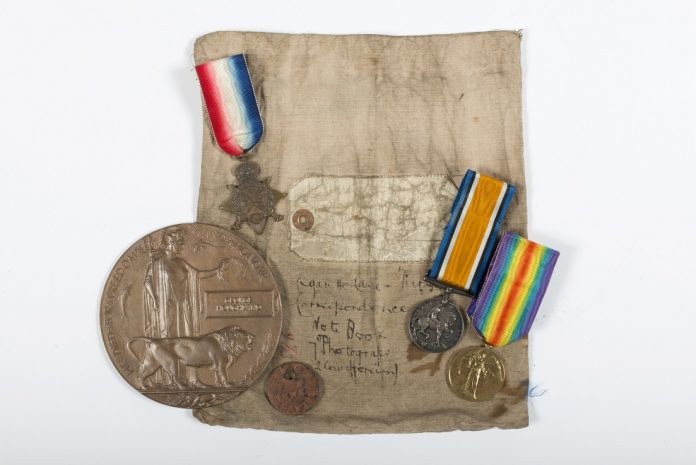 George Houghland was born around 1896 – the eldest of five children born to George senior and wife Mary. They lived at 27 Offa Terrace, Wrexham.

In the census of 1911 he was working as a draper’s errand boy and his father was a coal miner. He joined up with the Territorial Force on October 1, 1914.

He was 19 years and one month old, was 5’5” tall with a 31” chest and good eyesight. Many of the 4th Battalion were recruited from the collieries of North Wales.

George disembarked in France with the British Expeditionary Force on February 20, 1915. Conditions in the trenches around the Festubert area were very poor due to a period of very heavy rain.

In May, his battalion were involved in attacks on German positions on Aubers Ridge sustaining heavy casualties.

After periods in the front line the battalion were formed into a pioneer unit which utilised the miners’ digging experience to full advantage in excavating trenches.

It was not long before the 4th Battalion were again called upon, being involved in the battle of Loos.

It was during these operations that George was reported as wounded in action on October 4, 1915 and he died of his wounds the day after.

He is remembered with honour in the Sailly Labourse Communal Cemetery in France. He was awarded the 1914-15 Star, British Service and Victory medals.

This is one of many stories currently on display at Wrexham Museum as part of the Wrexham Remembers Them exhibition.

For more information about Wrexham Remembers Them, take a look at our article from last week.

This year it will be a very special Remembrance Service as we commemorate the 100th anniversary of the end of the First World War.

It will be held at the Royal Welch Fusilier Memorial on Bodhyfryd on Sunday November 11 starting at 10.55am.